Boson’s Metallic bellows are required in pipe lines or ducts for creating a high pressure through application of high temperature. These are deployed in the pipes or ducts to accommodate pressure and thermal movements (Axial, Lateral, Angular and Combined in the duct and pipelines) or expansion of the duct, which occurs due to high pressure and temperature. We are a full expansion joint manufacturer providing a wide range of flexible industrial components.
The Thermal movement in pipelines and ducting is occured by the following:

If the above metioned thermal movements (expansion and contraction with increasing and decreasingtemperature) are not considered in the system design, they may cause high stress, and possibly result in failure of the piping or connected equipment. To compensate the thermal movements, expansion devices such as expansion joints, metal bellows, ball joints, packed expansion joints, and flexible metal hose are used in the duct or pipelines.

BOSON manufactures a complete range of metallic bellows expansion joints, which works as a flexible seal. The convoluted part of the joint is designed to flex when thermal movement in the piping system occurs. It is mainly designed to accommodate lateral, angular and axial movements in the pipeline or ducts. Expansion can occur in one, two or three motions with a single expansion joint design.

WARNING: The torsional rotation is not absorbed by bellows (the twisting of one end with respect to the other end about its longitudinal axis).

We can understand that placing the flexible metal bellows at selected locations in a piping system that can accommodate the thermal movement. There may be some side effects,
which shall be faced when a bellow (flexible seal) is inserted to take the movement of the pipe and even occur when a pipe is cut in two.

A bellow can extend (straighten out) due to the line pressure, owing to its flexibility. This pressure thrust must be absorbed by some means or else the line may tear apart. This force may be accommodated by anchoring the pipe or with the usage of an expansion joint, which can incorporate hinges, tie rods, or pressure balancing bellows.

In low pressure applications the significant force is the spring rate, which is expressed in pounds per inch of motion. Thus, as the pipe expands due to increasing temperature the bellows will resist compression by the force noted in the spring rate.

Expansion of a ducting is run due to an elevated operating temperature (axial motion).

1. The piping system is properly guided and supported.
2. The weight of the piping system and the fluid being conveyed is carried by properly designed
supports and hangers and is, therefore, not included.
3. Friction forces caused by supports, guides, and other hardware extraneous are zero.

While designing bellows for ducts or pipings, pipe anchor and free supports are to be considered properly so that the thermal movements are not affecting the bellow adversely.
BOSON Engineering Pvt Ltd has the complete capacity to design bellows for the following execution: 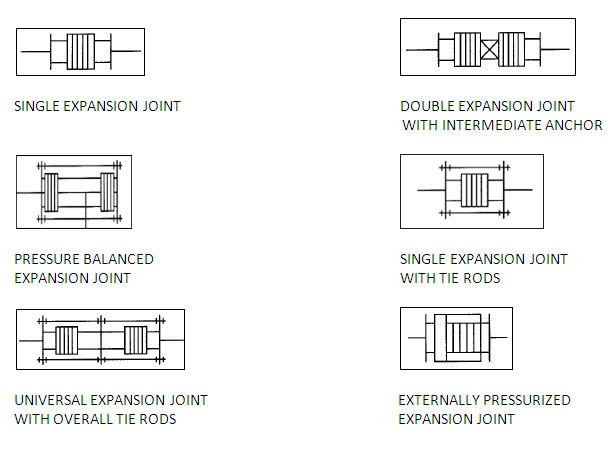 ALL THE ABOVE EXPANSION BELLOWS ARE MADE OF BOTH ROUND AND RECTANGULAR SHAPE, BASED ON THE TYPE OF DUCTS.

We have been using Boson made Gear Couplings for past 3 years and found satisfactory results.

The Rubber Bellows made by Boson are excellent product and giving us great service for last 2 years.

The Ball Valves that manufactured by Boson have provided excellent service to us for last 1.5 years.

The Thruster Brakes designed by Boson that used by us have provided certain satisfying results for last 3 years.

We are using the Boson made Pulley for past 1 year and it is providing satisfying service.